To begin, I’ll first start by saying it was the hardest race I have done. Mentally, physically, and emotionally. I broke tons of things on board requiring me to stop twice mid ocean to repair them. In turn, this made me extremely uncompetitive in the rankings. I’m OK with it though. I made it here, and that’s the main thing. I learned more in this race then I have in the past year of sailing the Mini. I’m thankful for every thing that has happened in the last year to allow me to be writing this from the yacht club in the Azores. The financial supporters, the friends, my family, everyone who has been a part of my campaign, I thank you!

The story of leg one is too big to do in one post so I have split it up into three. Enjoy!

The start in Les Sables was crazy. Tons of people on the dock wishing the 33 of us off. The nerves got to me and I was shaking as my lines were untied and I was towed out to sea. I was excited, but having nearly 1300 miles ahead of me is not an easy thought to swallow. On the way out I waved to the hundreds of people that lined the entrance to the harbour. 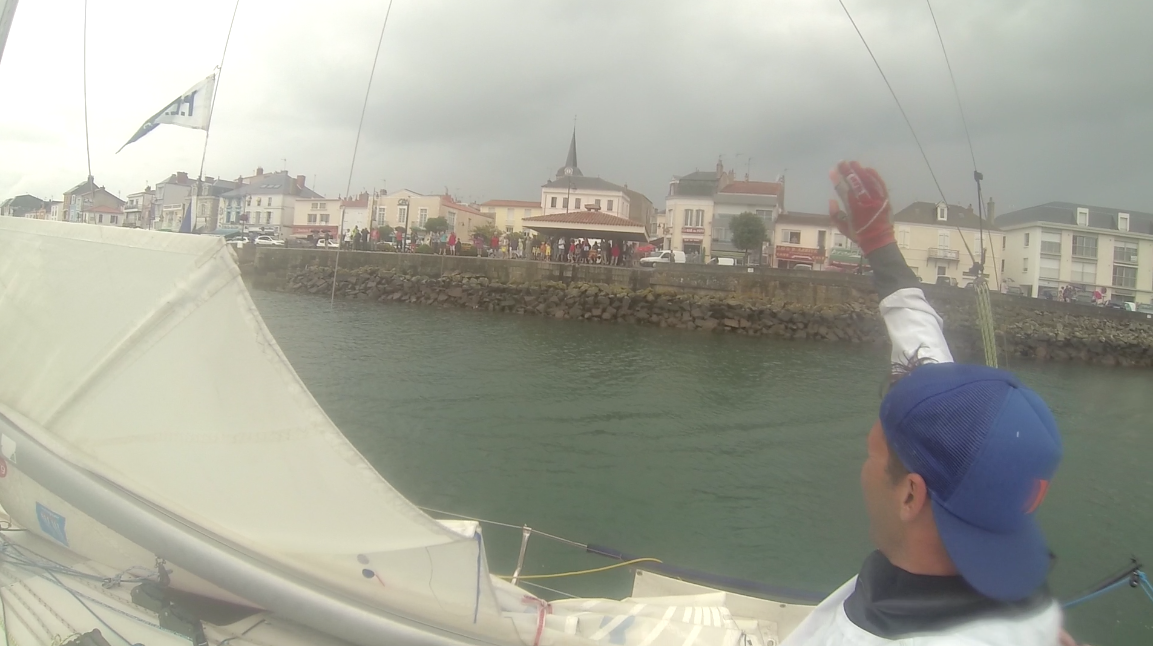 The French people love sailing and they were out in full force to see us off, despite the rain. Once out of the harbour I put the sails up and started testing, making sure everything was perfect for the start. I found my angle I wanted to start at, and realized I had two hours to wait before the start. I put the autopilot on to take down the headsail and chill a bit to calm myself. Then my autopilot stopped working. NIGHTMARE. I didn’t know what to do. I had fixed it in Les Sables before the race… so I thought. It had seized inside the ram that moves the tiller. (The thing that I hold to drive the boat) I had two options, turn back to port and not start with the others to fix the problem, or start the race and worry about it later. Of course, because I am a naive and excited 21 year old, I told myself Ill fix it out there. (Bad idea) 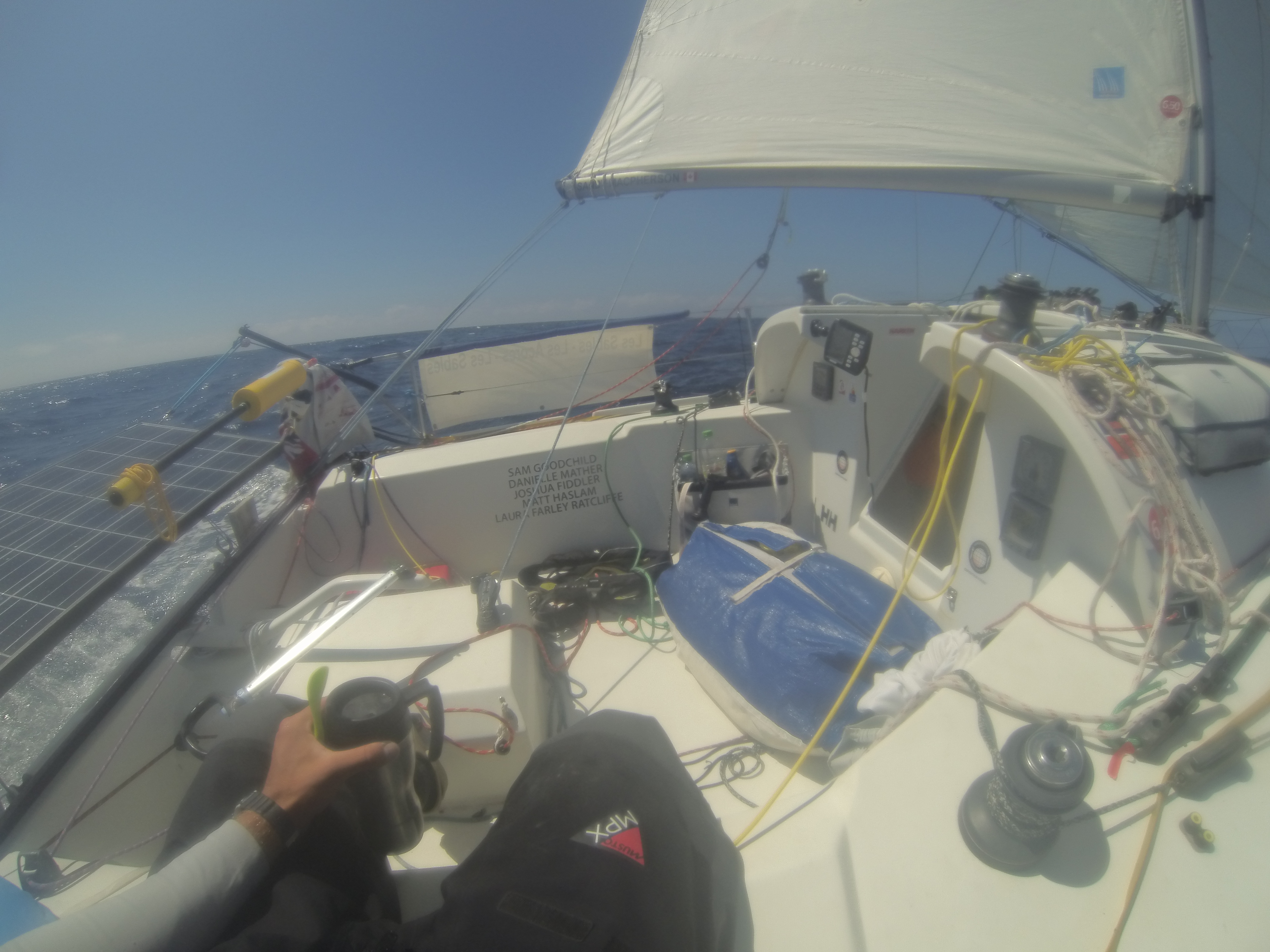 After twelve hours of hand steering, it was time to fix it. I tried to press the auto button again with the hail marry thought it might work, and VOILA! It did!!! 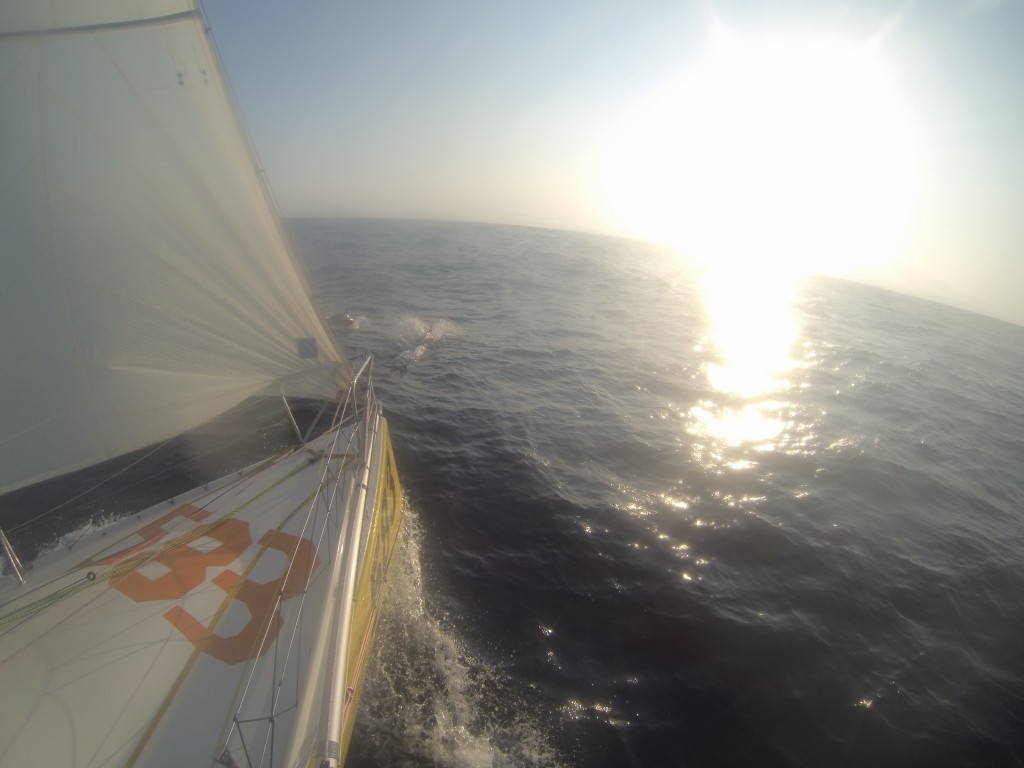 Astonished… I quickly made some food before it broke again. I had no idea what had happened but it was working! I slept about two hours before being awoken to 25-knot winds and the pilot spinning the boat out of control. Being thrown from one side of the boat to the other while half asleep was not the wake up call I wanted. Time to steer again. By this time we were nearing Cap Finistere. The forecast prediction said the wind was going to strengthen at Cape Finistere for the next 12-24 hours. Great…. At this time I was about 2 days into the race and had eaten one meal, and had slept about 2 hours. Steering by hand was a must because the pilot, even though it worked at this time, couldn’t handle the waves and would spin the boat out of control. I sailed some more until the breeze reached 30 knots. Time to take down the spinnaker before I broke something.

I put auto on hoping it would work for 5 minutes while I took the kite down. It didn’t. I managed to get the spinnaker down but the pilot seized again and I spun out of control. Four metre seas and howling winds didn’t lower the stress level at all at this point. 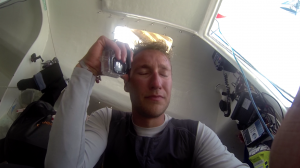 As you can imagine, my patience was wearing thin. 2 hours of sleep in nearly 3 days now, with an autopilot that wasn’t working. Not the best scenario. With the sails flapping violently in the wind, I said screw it, and took 5 minutes to chill and eat a meal. I use the term “Chill” both figuratively and literally as it was bloody freezing at this point. I quickly made an Expedition Foods freeze dried meal and then got back on the helm. I had a GPS waypoint set for the western edge of the Traffic Separation Scheme, which the whole fleet had to avoid. It took me about 7 hours to reach the western side and then I gave up. I was exhausted, hungry, and felt beaten. I took my sails down and needed to fix my autopilot. I needed sleep. After two hours of fiddling with ball bearings, rams and all things mechanic, I noticed Lizzy Foreman, on Hudson Wight, (another competitor) sailing close. I radioed her asking her for technical assistance regarding my autopilot. She didn’t have any answers but said Spain wasn’t that far away if I wanted to turn around and go to land to get it fixed.

When placed with an ultimatum like this, your mind goes a mile a minute. Part of me wanted to turn back and get it working professionally, then restart the race. This would mean I was uncompetitive, and possibly would finish outside of the time limit. I felt like if I turned back I was failing. Failing the sponsors, my friends, my campaign and myself. The other option was to sail to the Azores without an autopilot. Hand steering the remaining 900 miles. Not ideal but possible. When I needed to sleep I would just drop my sails and sleep for a bit and then put them up and keep sailing. It could be done.

After about four hours of trying to fix my pilot, I had a breakthrough. I managed to take some parts from my first pilot and some parts from my back up and make a pilot that seemed to work! I put it in and voila. I have never been so happy in my life. It meant I could go to the Azores!!! I put the sails back up and passed out. One third of the race done! Easy right 😉