I finished! Les Sables –Les Acores –Les Sables is completed. Not the most competitive of races for me, but definitely one of the most challenging, and in turn rewarding. I learned tons about sailing, weather, the boat, and myself. I know my limits better now, and now know when to push and when to pull back. I am calling this season a success, and have started to think about next year already. But first, let me tell you about Leg Two

On the 6th, we started the day with a briefing at 10am to find out if we were going to leave that day. Hurricane Bertha had stopped us from leaving the Azores the day before, and a lot of the skippers still seemed worried about the hurricane’s path. Nonetheless, the weather guru Classe Mini had working for them told us she had complete faith that we would be fine out there if we started that day. Therefore, a departure time of 5pm was set.

Knowing that you are about to sail into a hurricane, whether someone thinks you can do it or not, is actually quite a scary thought. I felt uneasy with the decision to start. I wanted to enjoy the Azores a little longer too 😉

We left the dock around 4pm with Portuguese people lining the harbour walls. It was cool to have such a big fan base on an island in the middle of the ocean. I hoisted my mainsail and gave a little wave to the people on the breakwater who came out to see the start. Vacation mode was over and racer mode needed to kick in.

Going out to the starting area didn’t help my nerves. Gusts up to 27 knots were coming down from the mountain, so I opted for the slightly smaller spinnaker and put a reef in the mainsail. My strategy was simple: go north. We were told the hurricane was strongest the more north we went, and due to my time deficit from Leg One, I wanted to push hard in Leg Two to try to make up some of that time. 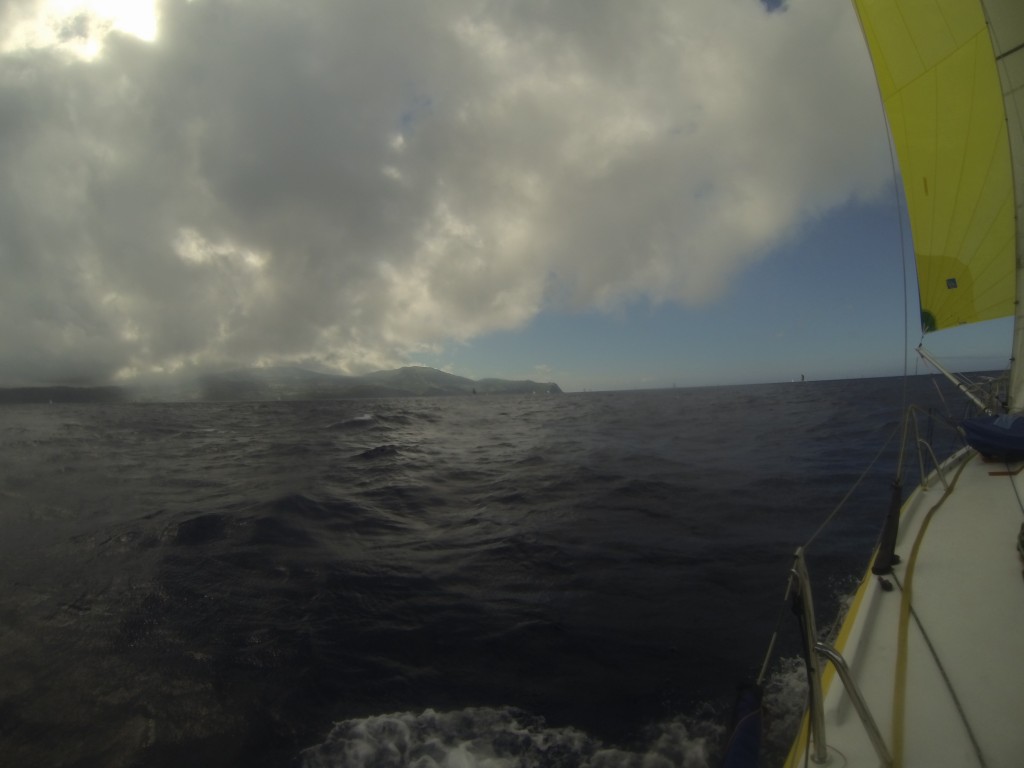 The start gun went and I hoisted the bright yellow spinnaker. BOOM! Off we went. A gust hit me and Yellowfin took off like a rocket. It was amazing to be blasting out of the Azores at more then 10 knots with 32 other boats. I surfed beside some other boats for awhile, making it an amazing start. It’s a shame with Mini sailing but because the races are so long, we usually never see each other. This was a rare experience to actually sail beside another boat!

Night fell and I started to settle in. The nerves were wearing off and I was getting comfortable again. It’s amazing the difference I noticed between this start and the start of my first race of the season. My first race, I was stressing about positions so much. I just wanted to overtake boats left, right, and centre. But this start was different. I knew how many miles we had to sail and I knew that the race was not won or lost in the first hour.

The breeze was still up around 20 knots throughout the night. The sun rose in the morning and I checked the boat as I always do. The first breakage had happened. ARE YOU KIDDING ME! The rudders…. The freaking rudders. The fix that I had made during the first leg of the race had broken. So every time I moved the rudders, the split down the centre would move. The crack down the centre was getting longer and longer, and there was a real risk of the rudder breaking off completely. I tightened the bolts holding it together about once every 6 hours for the first 3 days of the race. It was so discouraging knowing I couldn’t push hard.

But that’s sailing. The wind died down and I started to relax about my rudders. Tightening some bolts every day was holding the rudders together and I was ok with that. At least I didn’t need to stop like I had in the first leg.

The morning of day 4 I checked the rudders again and noticed that something else was wrong. Again, ARE YOU KIDDING ME! The metal piece that holds the rudders to the back of the boat was shifting slightly from side to side. This meant the rudder had less support and if there was a significant amount of pressure, the rudder would rip the bracket off the back of the boat. This would probably break my rudder and tear a huge hole in the transom. I looked down and noticed that it had actually broken the bolts holding it on. These were 10mm bolts! I had spares so I put some new ones in and tightened them. 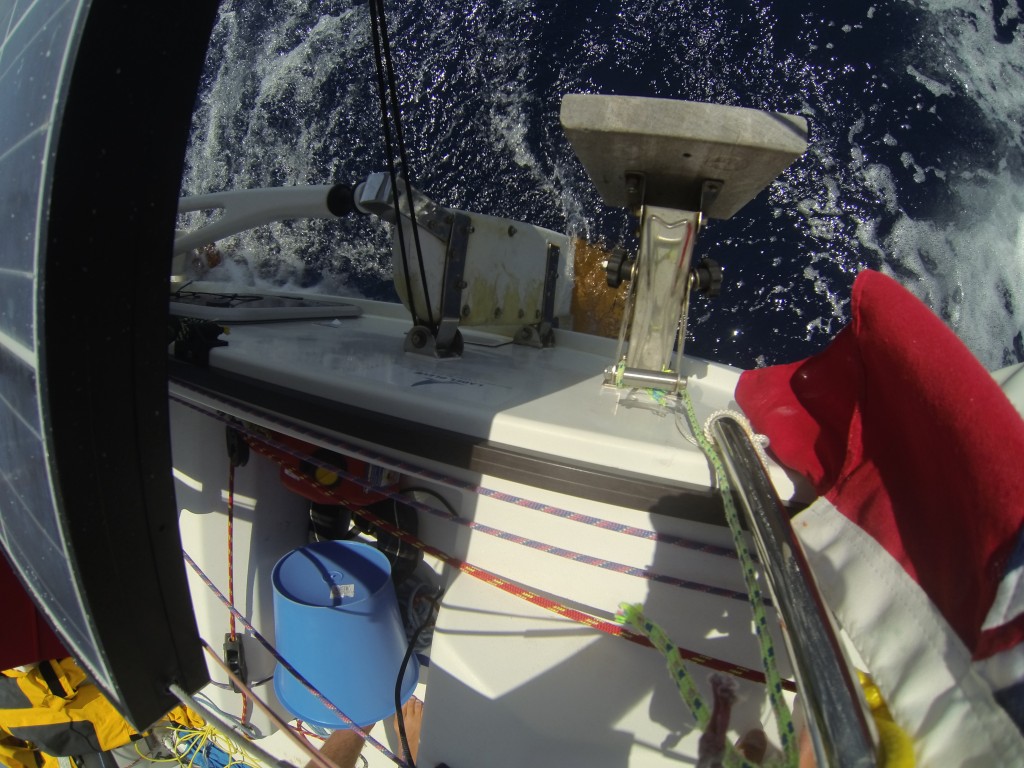 This seemed to do the trick. A few hours later I checked again and those bolts had snapped, too! There was too much pressure on the rudders and I needed to stabilize them before I ran out of bolts. I put some new ones in and made my best MacGyver job yet. I tied a rope to one of the bolts protruding through the back of the boat and lashed it to a cleat on the side of the boat. This meant that the bolts couldn’t shift back and forth, giving the whole bracket a little more strength. I also lashed the whole rudder bracket to the other side of the boat, stabilizing it from both sides. (Sorry if this is hard to visualize).

But I had a fix! With about 20 metres of dyneema lash line on my transom I was on my way again. Yellowfin was loving it! The sun was out and I was halfway to Les Sables!