I’ll start this blog by saying Douarnenez is the most impressive seaside town I have been to in France. The coastline of Douarnenez Bay, coupled with the green hills that surround the harbour, give the feeling of a quaint fishing village, with all the amenities of a larger city. A town of about 15 000, Douarnenez still retains the “small town” feel, with anyone and everyone passing along a “Bonjour” or “Ca va?”.

Though my French barely extends past this, I have managed to make friends with three key people: the harbour master, who is very kindly letting Yellowfin and me stay here until she is ready to sail; the baker, who I see every morning for “La usual” (one croissant and one pain au chocolat); and the owner of the restaurant next to the harbour office, who loves Minis, and makes the best espresso in Douarnenez.

Once I finished the MAP race, on the 15th of June, Yellowfin and I had a huge jobs list to complete before the Azores race. Many of the sailors here had other things on their minds because of the Mini Fastnet race, starting on the 22nd of June. Unfortunately, time and budget constraints prevented me from racing as well, but I was somewhat thankful because after about 14 days at sea, I was ready for a break. 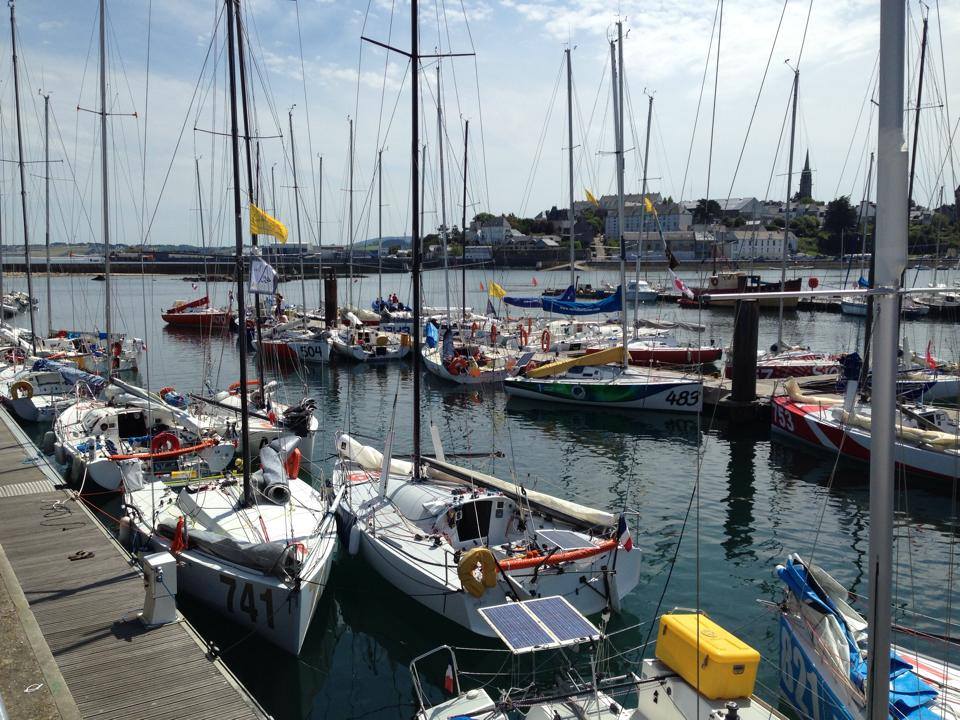 The week in between the MAP and the start of the Fastnet was hectic, to say the least. Boats that raced the MAP were busy fixing things that had broken, and new boats were arriving as well. Thankfully Yellowfin had no major breakages. However, my generator, which is my main source of electricity generation, had called it quits two days into my qualifier. I had tinkered with it a bit but it turns out my mechanic skills aren’t on par with my sailing skills. Luckily, the mechanic on site here figured out the problem and had it working in a couple of hours.

The next big job was changing the boat’s pushpits and pulpit to conform to the updated safety rules. Pushpits are the bits of metal tubing on the back corners of the boat, to which safety wires called “guardrails” are attached. The pulpit is the same thing, but at the front of the boat. To conform to the rule, more tubing needed to be welded on to the push/pulpit to make the system more robust as a whole. Unfortunately, much like my mechanic skills, my welding skills are relatively non-existent. Luckily, I found a company in Lorient who specializes in this type of thing, and managed to get a small discount once he realized I was living on the boat.

There are several other big jobs still on my to do list, but they will have to wait until I get to Lorient and am able to take the boat out of the water. After winning a solo round the world race, Michel Desjoyeaux, the most successful single handed sailor of all time, once said. “80% of the race was won before the start, I just had to finish off the other 20%.” I’m starting to realize what he meant. Getting the boat ready for the race is almost harder then the actual sailing!

Once the other sailors here had left for the Mini Fastnet, I felt like I was sailing solo again. Once on land, I was the only English speaking person here apart from an Estonian sailor, also not racing the Mini Fastnet. He and I collaborated on campaign ideas and helped each other on both of our jobs lists until yesterday, when he left on his 1000-mile qualification sail.

It’s cool to have so many new friends out there racing or sailing, and with the race tracker, I am constantly getting updates on who passed whom. To be honest, I wish I were out there with them. When racing, we have no idea where the other competitors are, beside the ones in sight, and weather predictions are limited to what we can pick up on the radios we carry on board. It’s weird to be on the outside looking in, watching the tracker with up-to-date weather files and position reports. This only gives me more motivation to get Yellowfin ready, so I can get back out there.

I can honestly say my mind is ready for the Azores race. Mentally, it’s often hard to prepare for long offshore solo races. For my qualification passage, I wasn’t mentally prepared, and had many frustrating moments because I was so full of enthusiasm and adrenaline. I have learned to push things aside, and come into the next challenge with a fresh mind, better equipped to make better decisions. As the old adage goes, “To finish first, first you have to finish.”

Each leg of the Azores race is only a few hundred miles longer then my qualification passage. This gives me confidence because I am no longer thinking about how daunting the length of the race is. I am thinking about strategy and how I can be competitive.

The one thing I do think about often is how lucky I am. I have the most amazing group of supporters, and there are too many people to thank to fit in one blog post. I hope I can do you all proud over the next two months.